Home Employee and Culture > EOM for the Month – June 2021

At Techno Infonet recognizing the top performer for the month by awarding them with the ‘Employee of The Month’ award has been an old tradition that has been followed since the Inception of Techno Infonet. But since the past few months Techno Infonet has been evolving and this wave of change has also been reflected in both the policies we follow and the way we do things around here including the Employee of the Month tradition. 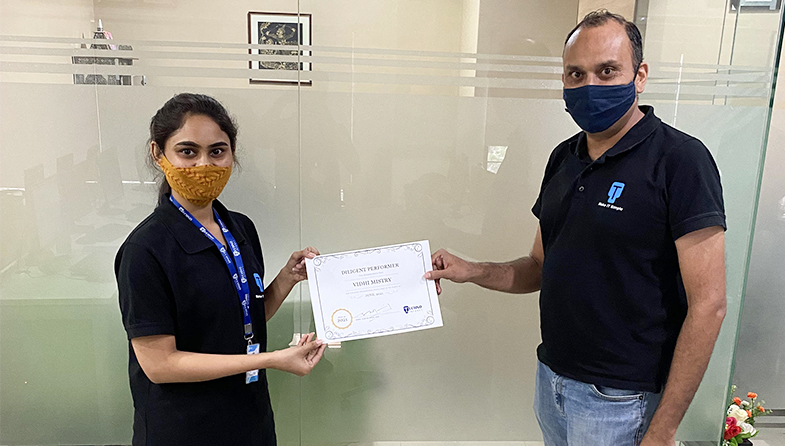 In the past, only the top-level management was part of the EOM selection process; but this time a new tradition of voting was introduced in order to spice up things by making everyone part of the EOM selection process. All the candidates wishing to participate in the EOM program are required to provide the list of their achievements for that respective month. This month the competition was run specifically for the managers including the manager for the HR department. Bhargav Upadhyay the manager for the developers’ team and Vidhi Mistry the manager for the HR department were shortlisted by the top management and were taken forward for the voting contest. All the achievements that they had mentioned were listed out and the employees were asked to vote based on their opinion as to who performed the best during the month.

It was a neck-to-neck competition and both of them were equally deserving of the EOM award. When the votes were counted Vidhi the HR Manager had won the voting contest by the margin of 4 votes and declared the Employee of the month for her contribution in recruitment management, employee redressal management and for the smooth implementation of the new policies. She has also been actively bringing a lot of positive changes in the employee culture of the organization.

The EOM policy truly reflects the breath of fresh air that has swept the premises of Techno Infonet and this feels like just the beginning of many exciting things that are yet to come.