Jitendra Yadav, the Sr. Team Lead PHP  at Techno Infonet was awarded the employee of the month for the month of February 2021. It was quite a surprising declaration considering that Jitendra had just joined Techno Infonet in the last week of January.

Jitendra Yadav, the Sr. Team Lead PHP  at Techno Infonet was awarded the employee of the month for the month of February 2021. It was quite a surprising declaration considering that Jitendra had just joined Techno Infonet in the last week of January.

While accepting his award he engaged with the Technorians in a short and interesting conversation where he answered some questions that were asked by his thrilled colleagues. The conversation has been summarized and given below. 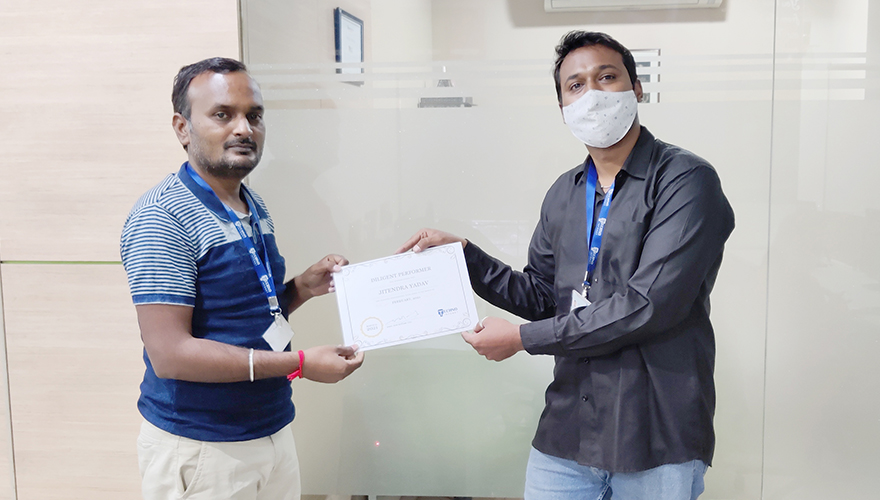 Technorians – Being the Sr. Team Lead at Techno Infonet what are the day-to-day tasks that you undertake in the organization?

Jitendra – I am mainly handling the technology and development side at Techno Infonet. I ensure that the development team is trained and challenged resulting in constant learning while keeping them motivated throughout the process. I also ensure that every client’s project gets executed properly, removing roadblocks that appear by helping the team solve technical and coding problems that they face.

Technorians – What could be the reason for you being bestowed with the award for the employee of the month in the first month of your joining itself?

Jitendra – I’m not completely competent or worthy to answer this question. I think Sam Sir the Director of the company and the HR can better answer this question. But from what I have been told, I think the main reason that has contributed to this award is probably the way I adjusted quickly in the organization and tried to bring minor technological learnings and innovations to the development side of the organization. But this would not have been possible without the support of Sam Sir our director and the rest of my team. You guys have really been welcoming and I can’t thank you guys enough.

Technorians – What is the message that you’d like to give to the freshers who are looking to start their careers in the industry?

Jitendra – I think the current generation lacks the patience to be consistent and work their way through the ups and downs in their careers. They work hard for a year or so in the beginning and then get demotivated when they come across failures and this stops their learning process that will actually bring them up in their career. I have completed around 10 years in my career and my failures are still my best mentors. I wish all the fresher all the luck for their career.

And Thank You Technorians once again for making my day.