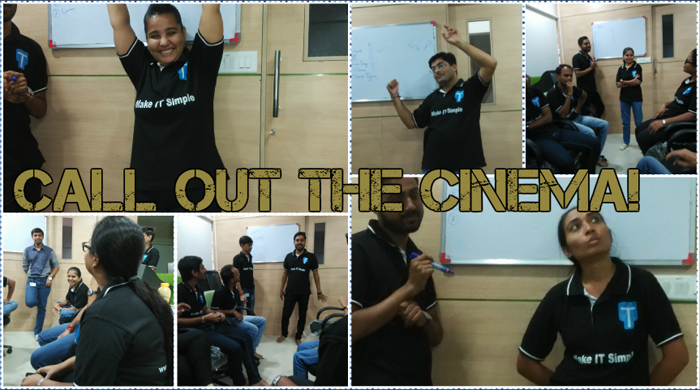 Have you ever played Call out the Cinema!

India being well-known for its commercial cinema, better known as Bollywood you will hardly find any Indian saying “No” to Film based games.  This time, to shoot up the fun level to pinnacle “Shreyas Gandhi” our dexterous PHP team leader came up with a frolicsome game formed on Indian Movies. You can also call it as a Bollywood quiz to throw light on.

Now the game sounded to be child’s play, but was an uphill battle to crack the name of the movie. According to the rule of the game, one of the members will be chosen to go out of the room so that the rest of the team can decide the name of the movie to which they would be providing clues. Although, it’s not easy to get the clues because here comes the TWIST! The selected member had 7 questions or say it as “7 life lines”, which he/she has to smartly probe to get the details of the movie.

The questions were the name of hero, heroine, song, villain, year of release to name a few. Now, based on these collected information the movie name was to be guessed correctly.  Isn’t it tricky!

We had a great time irking the person trying to call out the movie name with clues.  A lot of us could not tolerate the hard time which the whole team was giving and surrendered themselves. In the interim, we had full-fledged fun by playing a silly prank on one of our team members giving a pseudo movie name. Seriously, not even a millisecond was spent without humor. It was super entertaining in a real sense start till end.

Really, we did not realize we were making memories, we just knew we were having fun!