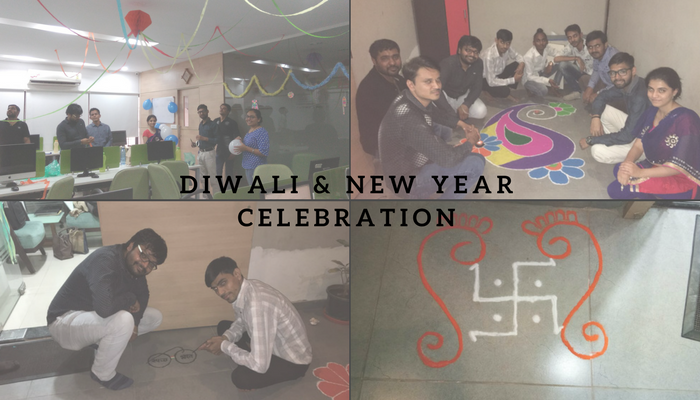 “The greatness of culture can be found in its festivals. – Siddharth Katragadda”

India is a country with rich and varied heritage. Here, culture and customs play an important role and symbolizes the faith and devotion towards God and Goddesses. This is yet another festival which symbolizes the victory over evil and the festival of lights called “Diwali”. This Hindu festival is celebrated in the honor of the return of Lord Rama, his wife Sita and his brother Lakshmana from exile of 14 years defeating Ravana. People of Ayodhya lit the “diyas” on the path symbolizing the great victory.

Well, here at Techno Infonet, we celebrated this victory by decorating our office and drawing some spectacular Rangoli at the office entrance. The Diwali and New Year celebration was planned on 18th October 2017, followed by a short mini-vacation. So, obviously, none had that feeling and mood to work. Well, the celebration began with the office decoration at 4:30 PM. Our decoration included torans, balloons, ribbons, and stickers. All took different decorating materials and became busy decorating the office. It was a busy hour but in the end, the office looked spectacular.

We then gathered at our office entrance to make Rangoli. We all were given different colors to draw our own imagination into the floor. After deciding the image, we all pictured it on the floor and colored it with a variety of colors. Some made the Swach Bharat Abhiyan Mission logo, some drew the artistic designs, and some drew the Swastik. Well, this indeed shows the depth of your imagination, and we the Technorians, do not fall short of any.