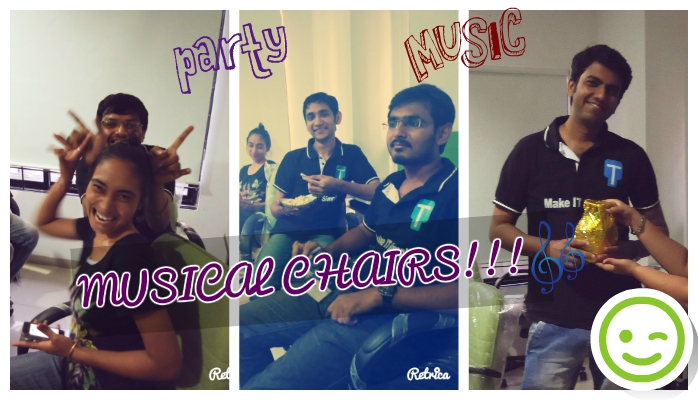 It seems that we had to await since a very long time to get back with the child in us. The pleasure of playing games at workplace is such that we never wanna miss out a day without it. The thrill of excitement and fun was so overwhelmed that i had to decide something which is very crazy and leads to more than what was expected by my team. We then decided to play an old favorite, perfectly silly game which always proves as a crowd pleaser – MUSICAL CHAIRS.

The moment this game was announced by me, everyone was so energized & filled with enthusiasm that they had a child like desire to win the game. With full loud music & with a train like my team standing to start with the game and a rush to win, by pulling and pushing their mates this game had a super fabulous start and this game went on. As and how the players were eliminated, everyone was cheering for the remaining players as they attempted to capture the winning title.

The event was a huge success, everyone proved that their work load can be easily embraced with such an age-old game of Musical Chairs. This was the most fun-time game we ever had with our team. After so much of fun we all had a great discussion about our child-hood games and memories attached to it by having snacks along.