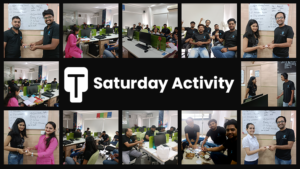 “Never underestimate the importance of having fun.” -Randy Pausch

As life throws curveballs now and then, we start taking frivolous matters too seriously and forget the importance of enjoying little things. The real fun lies in the small activities which are relished in most unexpected circumstances.

An amusing Saturday activity was organized by Techno Infonet in May month to cheer up the employees. Few highly entertaining games were played during this activity. Basically, 3 games were performed: Tambola Housie, Whisper Challenge, and Pictorial Game. The event began with the beloved Tambola Houise game. The caller’s dramatic way of picking up numbers and the players’ enthusiasm to complete the full house, it made the game quite enjoyable.

The second game was the Whisper Challenge. Technorians were divided into two teams and each team had to send one player for every round. After that, one player had to wear a headphone and guess the sentence spoken by the player of another team. It was an amusing scenario to watch players uttering funny sentences and adjacent players guessing completely wrong sentences.

The last game was Pictionary in which two teams had to participate. One player had to be given the movie name by an opposing team and that player had to elaborate it with the drawing on the whiteboard. Technorians laughed hard at the funny drawings and incomprehensible shapes. Indeed, it was a memorable and mood-lighting game!

Finally, delicious Aloo Paratha was served along with curd. Technorians feasted on the tasty dish while sharing funny incidents with each other. The Saturday activity opened a window of an opportunity to build a harmonious work culture and enhance employee morale.