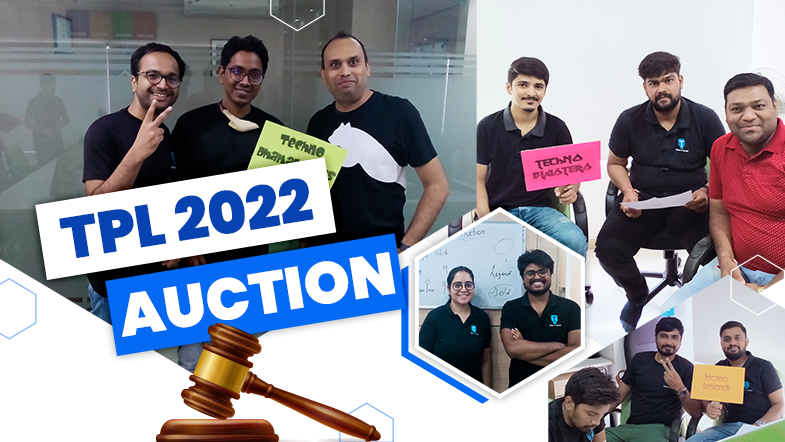 Due to the craziness that dominates the new IPL season, the whole country is engrossed in this entertaining cricket battle. How could Techno Infonet miss out on this golden opportunity of organizing a refreshing fun activity for its employees? Techno Infonet sponsored the exhilarating fun event of the “TPL Mega Auction” to recreate and vivify the real scenario of the IPL auction.

Technorians were divided into 4 teams-Techno Dhamakedar, Techno Blasters, Techno Monsters, and Techno Legends. Each team was allocated a predetermined budget. Teams were required to select 2 all-rounders, 4 batsmen, 1 wicketkeeper, 1 legend, and 3 bowlers, resulting in a minimum of 11 players. As part of meeting the criteria, each team could keep a maximum of 15 players under the allocated budget. Any team with more or fewer players than the defined limit would be disqualified. Moreover, strategies, manipulation, and synergy played vital roles in the whole auction.

There was a particular credit number given to each player. However, these credit numbers were kept confidential sometime from bidders to maintain the excitement level of the game. Based on the credit, the winning team was determined. Among the flurry of money and intense bidding for star players, Techno Dhamakedar was crowned as “Champion Bidders” and received the winner’s trophy.

Technorians were anxious when the curtains came down on this remarkable fun activity.

This Saturday activity was full of playful spirit, enthusiasm, healthy competition, and strategic planning. Technorians shared the event with astounding joy and vim.

Hence, with the successful completion of the Saturday fun activity, Techno Infonet reiterated the fact that employees are the foremost priority of the organization.