In most cases, a web app fails to fulfil the expectations of the publisher not able to deliver intended results. It is not the app lying at fault, but the way app launch and marketing processes at the company falter.

Building an app needs a step by step approach from a laravel development company and any mistake at any stage can cost big time to the app as well as the business behind it. So the biggest question arising here is how a business can avoid catastrophic results by getting away from the blunders? 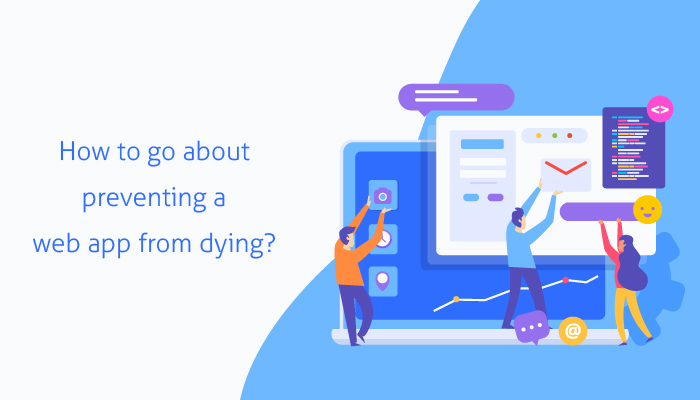 Being an experienced laravel development company for years now, we have observed that app usability is the key ingredient behind an app success. Then stands user experience, followed by other variables.

This clearly means an app has to be a perfect mixture of usability and experience allowing for ease of use and problem solving of users for what it is meant to be. Initially, people were only concerned with the usability factor neglecting the experience, but with so many competitor apps around now experience is all the more as important as usability.

Where to begin with rescuing an app?

It is where the actual dilemma starts. How to begin with the rescue operation of your web application? Before discussing about the measures for reviving your app, it is important to keep some important considerations in mind. Let us see what those considerations are and why are they important.

Technical infrastructure modification can help in rectifying the code base
Just a tiny issue can make even the largest projects fail miserably with the foundation of technical aspects not working in place resulting in terrible results. Broken code base is such a common issue making everything a mess and hence only technical documentation can come to rescue, which might take up too much time.

Hence, right amount of time should go after infrastructure and automation. With a systematic plan for regression testing from laravel development company, technical advancement is surely possible with prior mistakes corrected accompanied by option for mitigation.

Get app searchable through App Optimization
If success is what you want to strive on early on then optimizing for a large audience is possible via working upon keyword competition and app optimization.

The design should be revamped as per contemporary standards
A successful web app design is important for the success of a business and hence new designs should be constantly tested for optimizing downloads.

Start enhancing a dying web app that is vanishing gradually
App projects failures are a common phenomenon nowadays and if right measures not implemented then problems related to a web app can become irreparable making it hard to revise the web apps and take them out of obsolete status.

Dedicated Mobile App Developer is Ready to Serve You Full-time

Ideally, apps wouldn’t fail with everything from start to finish going smooth but in real world that is simply not possible even if the best laravel development company is in charge of the job.

A web app has the potential to fail if right kind of steps not taken for the design and development by a laravel development company. If your web app is not working, there certainly is something wrong with the process and correcting the same after identification makes everything set back things in place.

With extensive experience in working on PHP for more than 6.5 years, Mr. Bhargav Upadhyay has been associated with Techno Infonet as PHP Team Lead. Through his expertise and knowledge of various technologies such as Cl and Laravel, he has produced exceptional results for clients.