Technological advancement was the reason due to which surfing internet or internet usage had gained a lot of importance. This wasn’t the only use which we humans made an optimal use of, we started totally relying on it. Even corporates served the best needs out of it in terms of globalizing themselves and reaching to their target oriented masses. Client/Customer retention being the major focus of corporates, Socializing became utmost important. And now as technology is advancing and becoming nano day by day, its has become a necessity to customize our websites accordingly. According to Statista – The Statistics Portal, in 2013, 73.4% of the overall population was on mobile internet while by 2017 this static is expected to raise up to 90%. As the popularity of portable devices increased, we started accessing our favorite content while being at home or not. But we always had a complain that the websites aren’t user-friendly as well as favorable to their sight. This is the point where a need emerged for a design which could be favorable to all devices starting from PC to mobile phones and tablet. And this kind of design is named as RESPONSIVE WEB DESIGN. This word was first introduced by “Ethan Marcotte” in one of his article and also in his book named “A BOOK APART, RESPONSIVE WEB DESIGN”. Now the question that arises is; What is RESPONSIVE WEB DESIGN, How does it work and whether it is useful or not to adopt…? 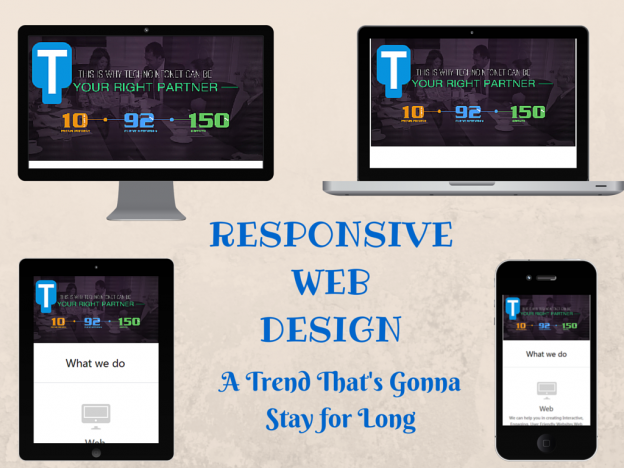 WHAT IS RESPONSIVE WEB DESIGN? RESPONSIVE WEB DESIGN in a simple context means a WEB DESIGN that responds to every environment starting from desktop to tablet and mobile. It has adaptable layouts and scalable images that can fit in any screen (irrespective of their size) with out disturbing their clarity. Methods used to achieve RESPONSIVE WEB DESIGN: Responsive web design can be achieved with the combination of FLUID GRIDS and CSS3 media queries and by using flexible images, media player etc.

After knowing about what responsive web design is and how it is achieved, let’s find out what are the benefits and drawbacks of this development.

It’s sad to say that in-spite of having so many benefits, it has some drawbacks too such as:

Want to Connect with One of the Best Web Development Agency?

After knowing everything about this development, the only question that strikes us is – “Whether we should adopt this advancement in our business?”. So to make it a more simpler one, I would suggest firstly understand who are your end-customers and what’s the maximum possible way they would try to reach you and on the basis of this answers and the above information available, you would surely be able to take a decision.

Techno Infonet is a LEADING WEB DESIGN COMPANY located in the USA which works on RESPONSIVE WEB DESIGN as well as on other open source IT services.

We at Techno Infonet are ready to assist YOU for any RESPONSIVE WEB DESIGN related queries.

For more information related to our services, please visit www.technoinfonet.com.