Home Employee and Culture > Employee of the Month for the month of December – Mr. Sunil Sonkusare

Employee of the Month for the month of December – Mr. Sunil Sonkusare 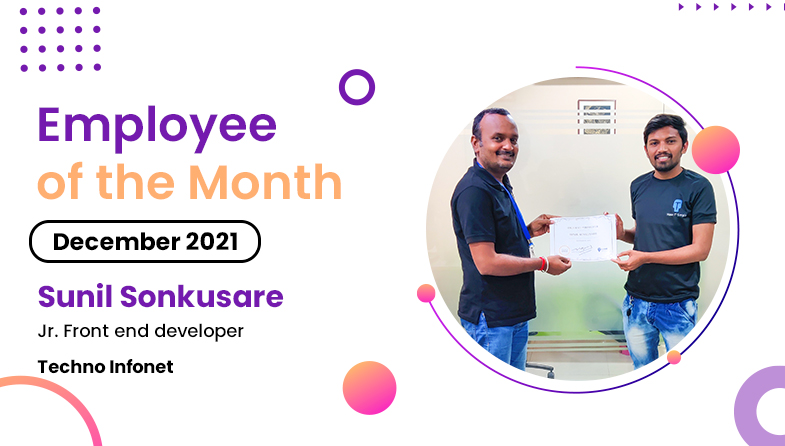 Employee of the Month (EOM) at Techno Infonet is a reflection of the three critical S’s Sincerity, Sacrifice, and Success. Every month, diligent Technorians compete against each other to grab this award. In the Month of December, the EOM badge was bagged by Junior Front-end Developer Mr. Sunil Sonkusare.

Inventive and aesthete are the two words which can characterize Sunil. For every Front-end development task which is assigned to him, he burns the midnight oil to come up with best results possible. He is known for his organizing skill-set; before stepping into any given task, he planned and prioritized it so well that the best results are delivered on time. In some of his assigned projects, even management got mesmerized with his creative inputs and out-of-the-box thinking.

After the announcement of the December EOM, Sunil was bit surprised to hear his name as the Employee of the month, but in his heart, he was aware that his consistent efforts will get recognized one day. The Sr Team Lead Mr Jitendra Yadav at Techno Infonet, has presented the award to Sunil and wished him a prosperous future ahead. Techno Infonet is proud to have such an ignited mind in its team.