In Techno Infonet every 1st and 3rd Friday the HR plans out surprises for all its employees. Friday comes with the end of working days and welcoming of the weekend. Techno Infonet always believes in the welfare of the employees and hence looks forward to making them happy. This not only delights the employees but also contributes to creating a good work environment, where we all spend most of our time. So, this weekend surprise was conducted to generate smiley faces before we all depart for our weekends. 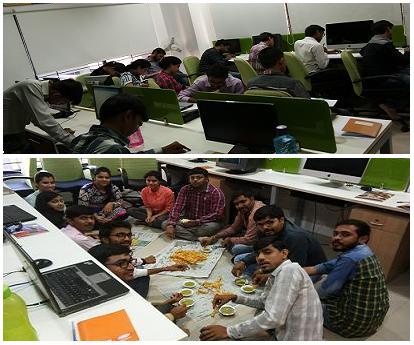 This time the surprise was an indoor game called the ‘Paper and Pen’ which was followed by some lip-smacking snacks. The game goes something like this – one of the team members has to choose a category (Fruits, Vegetables, Movies, TV Shows, Pets) and write at the top of the paper. Now, the member has to start by writing two names under the category penned down on the paper. This sheet is then passed to the next team member where he is required to write two new names under the same category. The rule of this game is that no team member had to repeat the names otherwise they would be getting a negative marking. This game made everyone think about names that they had to write down, wherein it is not being repeated.

This Paper and Pen game was really fun as it recalled our childhood days when we all used to remember the name of fruits and vegetables. We really enjoyed this game. All the team members were asking each other for help. Some of them even started thinking about the fruits and vegetables they did not like so that they can write it down. After the game, we had snacks followed by some casual chit-chat. I will come soon next weekend with some more news on the weekend surprise activities.