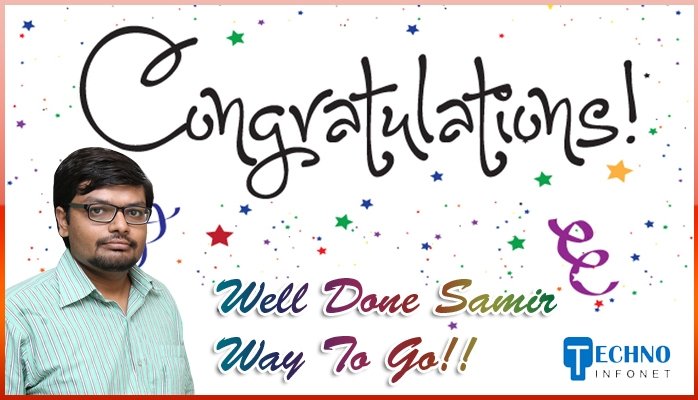 A huge congrats to Samir Patel for his promotion as PHP Team Leader. There is a famous adage” With success, comes greater opportunities and challenges”. This is of course not to spook him since he knows how to face it with the same zeal, which he always has. Not to mention, but Samir’s promotion is a benchmark in the graph of his career. Isn’t it?

Samir Patel initiated his journey with Techno as a trainee in the year 2011 and steadily progressed to the position of Sr. PHP developer and now is promoted to as Team Leader in PHP. Kudos to you Samir! Although, we hope that success will not get to his head, neither will it be his career’s epigraph. For Samir to professionally grow more and more this promotion has raised the bar. We have no doubt that he would put his best efforts to get many more jump ups.

Our golden advice to him would be to treat his new profile as a mission and keep exceeding expectations. There is no doubt to the fact that he is exceptionally handling the team of juniors/trainees with all his remarkable potential. To honor him on his big day, On behalf of Techno, Our HR Manager presented him the Letter of Promotion. The entire team applauded and Samir was requested to say a few words about his experience and achievement in Techno Infonet.