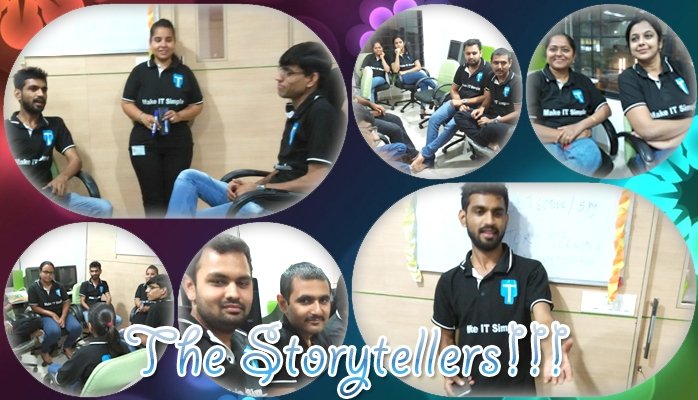 Did you know Stories break the silence and encourage those who live, work, and dream?  It is a fact that” We all are a storyteller at heart, and we all have a story worth telling”. As you all might have already known by now that Saturday at Techno is a fun time, learning time and off course time to bring out the hidden talent. This time, we played a fantastic game called, “THE STORYTELLER”!

The keynote of the game was on topics such as Spy Detective Story, Romantic Love Story, Family Story and Horror Story, which were put on chits.  By dividing the team into two, namely A and B, and our HR picked up a chit to decide the theme of the story. Once the subject of storytelling was revealed one member of Team A started the story with a sentence, and Team B member spoke a connecting sentence, without failing to keep in mind the focus and this is how it went. And of course, whenever any of the team brought a twist in the story SCORED a 5!

Three amazing rounds on Spy Detective theme, Family Story theme, and Romantic Love Story theme were played. The Technorians by flowing out all their creative juices tried to showcase their imagination in the best possible ways.Interesting characters from secret agents like Abu Jafar, Sonia and Jack to the rebirth of lovers kept intertwining making the teams at times think deeper and sometimes laugh louder.  The stories went on and continued creating snapshots, sequel andvirtual reality in our heart and mind. After the games to call it a great day we had mouth-watering snacks and beverages.

Now don’t you feel, the world is designed by two things — stories told and the sweet memories left behind?