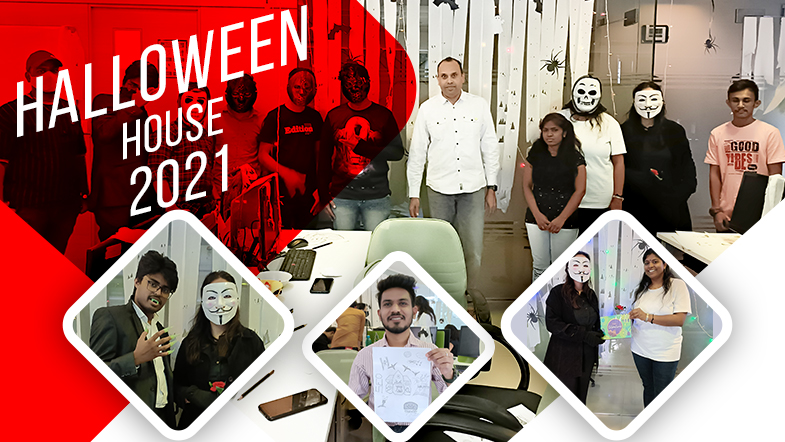 The festival of Halloween which is celebrated every year on the 31st of October in countries like the United Kingdom, Ireland, Scotland, United States of America, etc. commemorates the eve of All Saints Day in western countries. The origins of this spooky festival can be traced back to the pre-Christian Celtic festival of Samhain. The ancient Celtic tribes of Central Europe believed that on this day the dead would return to earth on Samhain and would celebrate the day in honour of the deceased by gathering and partying around the bonfire. Over the years the tradition has evolved. Today the festival is enthusiastically celebrated by children and adults across the globe by partying and parading dressed up as ghouls, goblins, witches, or even fictional movie characters. Joining this spirit of celebration, this year Techno Infonet organised a Halloween party at the office.

We decorated our office in a spooky way using items like- decoration lights and paper cut spiders, bats & danger signs. All of us were dressed up in spooky attire and there was also a special prize for the person wearing the best costume. We played multiple games like Trick or Treat, Scavenger hunting, and also shared horror stories and drew spooky pictures, which was followed by some snacks and beverages. We also kept a small competition of “The Mummy wrapping” where we divided the Technorians into 2 groups and asked each group to wrap one of their group members as “The Mummy” using paper rolls. At the end of the event, the winners of the various games organized were declared and given prizes. In the end, it was fun and everyone participated with much enthusiasm and zeal making it one of the most memorable events organised at Techno Infonet.